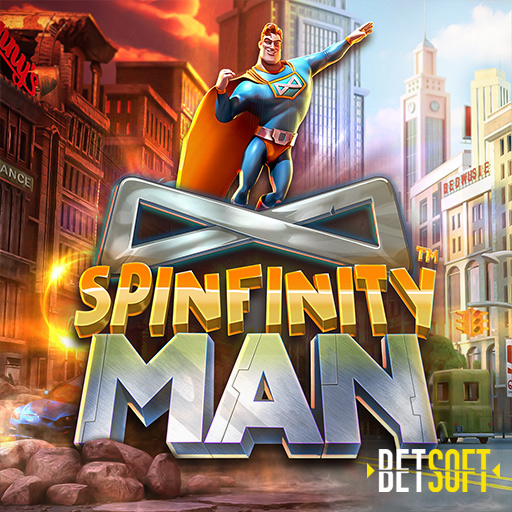 When crime plagues the streets of Metropolis, or citizens are in peril, Spinfinity Man will answer the call! With the help of special Super Wilds, a Spandex costume-full of his own superpowers, and more than a little self-importance, Spinfinity Man has become the saviour of the city.

A fun and frivolous take on the golden age of superhero comics, Spinfinity Man is a cluster-based, cascading game where groups of more than 4 of the same symbol explode. Spinfinity Man’s randomly-chosen powers are drawn as animated 2×2 symbols – triggering new cascades and vanquishing groups of criminals in a single bound. Laser eye beams burn away either a full column or a full row of symbols, or both if you find a double beam. Icy breath can freeze and shatter a small or large cluster of symbols. Telepathy will remove all symbols of a single type or colour.

With his face on every newspaper in town, Spinfinity Man has more than his share of admirers. Everywhere he goes – from base game to free spins feature – his dedicated fangirl follows, hoping for a picture with her idol. When she snaps a photo, a cluster of symbols will pop and trigger an immediate cascade. The fangirl cluster count resets with every new spin – giving Spinfinity Man the chance to prove himself (and pose for more selfies) all over again.

While solving street-level crime is all in a day’s work for Spinfinity Man, a more insidious evil is encroaching on the city! Supervillain Mr. X is developing his next dastardly masterplan. It’s up to our hero to follow the clues, fill a dedicated Mr. X meter, and catch him red-handed in a city-shaking bonus round! Here the two superhumans go head-to-head, but Mr. X has an advantage: he’s replaced all Spinfinity Man’s power symbols with his own and increased the odds of them appearing.