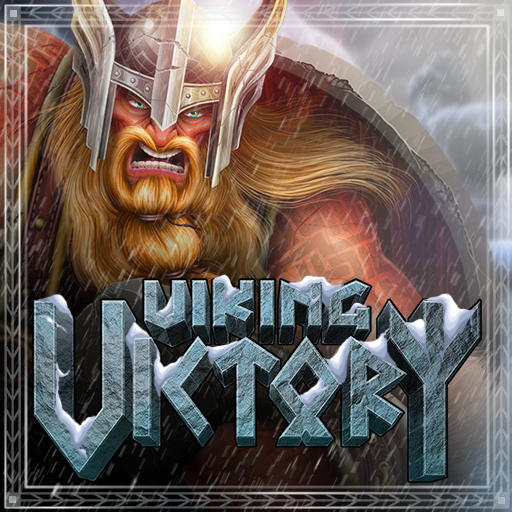 4.6 out of 5 stars.
Log in to rate the game
Prepare to raid the reels in our exciting new Viking Victory slot with expanding reels, a first for Rival! Head back to 800 A.D. and the height of the Viking Age where treasures are yours for the taking.
The Scandinavian seafaring warriors raided coastal sites and monasteries in the British Isles for over 300 years, leaving their mark on the world as pirates, raiders, and traders.
Now, you can become part of the Viking conquest when you spin the expanding reels of Viking Victory! This game begins in a snowy coastal fjord in regular game mode. Get embroiled in fierce Viking battle when you hit 3 bonus symbols and unlock a fourth row of symbols, preparing you for the Journey to Asgard round on a 5×4 grid, with 1,024 ways and featuring a x3 Multiplier Wild. A successful journey to Asgard could mean landing 3 more bonus symbols, which would bring you to the Glory of Valhalla round which opens up a 5×5 grid with 3,125 ways and multiplier wilds increase to x9! Throughout each of the game rounds, you will be piling up winnings with the exciting drop symbol feature.
Icons for this exciting game include the Norse goddess Freyja, her husband Odin, Freyr, her brother and the god who brings the hammer down! Thor! Other icons include the significant animals of Norse mythology, the bear, the wolf, the goat, the reindeer and the raven. The Wild icon is a Magic coin and the scatter icon is the Odin Medallion. The icon set is completed with mystical rune stones for the ace, king, queen and jack.
Grab your shield and set out on an exciting and rewarding journey from the Scandinavian fjords to the golden halls of Valhalla in Viking Victory!
Log in and review this game
Share your thoughts with other players